Learn more on our scientific orientation:
fields of research and specific projects

In recent years Transmission Electron Microscopy (TEM) has proved to be one of the most powerful techniques to directly elucidate the structural organisation of supramolecular assemblies on the nanometer scale and beyond. A quantum leap in the field was the development of cryo-techniques, in particular cryo-TEM, which allows to study ultrastructures of self-assembled organic materials under native conditions e.g in the presence of the solvent in which the self-assembly takes place. This development is of special importance as the ultra structural organisation of molecules emerging in a supramolecular aggregation process differs in most cases significantly from its organisation in the crystal compound. Therefore, X-ray diffraction based techniques, which are indispensable in the field of protein structure analysis, are of less or even no use in the field of supramolecular chemistry.
Moreover, the recent developments in instrumentation and computation, in particular the tomographical and image processing techniques, have further sustained the importance of TEM as they help to make detailed three-dimensional structural information available. 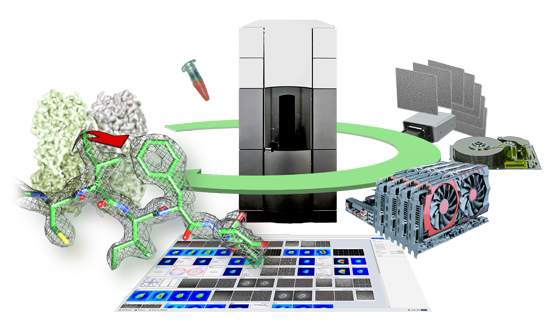 Effective operation of biological macromolecules like peptides and proteins is not only controlled by their molecular construction, i.e. the sequence of the constituting amino acids, but is also substantially dependent on their three-dimensional structure (tertiary and quartary structure). Moreover, only distinctive changes of the overall shape resulting from mutual movements of the peptides subunits like twisting and folding facilitates their functionality. This mobility makes them hard targets for the classical structure analysis from x-ray diffraction.
Three dimensional reconstruction of the peptides from several thousands to millions of single images of the target protein in its frozen hydrated state from cryo electron microscopy overcomes the methodical restrictions of the crystallographic approach and allows not only for the analysis of distinct conformations but also for the identification of structural intermediates that occur during the conformational changes which helps to elucidate the mechanistic mode of operation further. Aided by a high degree of automation of our modern electron microscopes, we are able to collect the appropriate number of single images in quite recently unreckoned short times of several hours up to a few days. In that way, the so called single particle analysis (SPA) can nowadays reach resolutions down to 1.1 Å within remarkable short times.

Recently, a breakthrough in developing artificial Light Harvesting Complexes (LHCs) has been achieved through combining the self-organization tendency of surfactants with the unique property of J-aggregating organic dyes having coherent exciton migration similar to the natural LHCs. Depending on the chemical structure, the presence of additives or the conditions of sample preparation the amphiphilic dye aggregates show different packing motifs. Correlating the optical properties of the ...

Special amphiphilic calixarene and fullerene derivatives with Newkome-type dendrimeric headgroups or amphiphilic non-ionic polyglycerol derivatives possess a unique capacity to form structurally persistent micellar assemblies. In cooperation with the groups of Prof. A. Hirsch (Institute of Organic Chemistry at the Universität Erlangen-Nürnberg) and the group of Prof. R. Haag (Institute of Chemistry and Biochemistry at the Freie Universität Berlin) we study the molecular factors which ...

The formation of insoluble amyloid deposits by protein fibrillogenesis is a common hallmark of many neurodegenerative diseases such as Alzheimer's or Parkinson's disease. In cooperation with Prof. B. Koksch (Institute of Chemistry and Biochemistry at the Freie Universität Berlin) simple peptide systems are structurally characterized which are designed to model the conformational transition that is responsible for the formation of amyloids. Cooperation with Prof. B. Koksch (FU Berlin) ...

Self-assembly of synthetic amphiphilic polymers in water leads to a fascinating wealth of structures, many of which show analogies and similarities to the structures found in cells and cell organelles. Inspired by their biological "prototypes" strategies for preparing multicompartment micelles by using ternary block copolymers have been explored by the group of Prof. A. Laschewsky (Institute of Chemistry at the Universität Potsdam). Cryo-TEM and cryo-tomography allows for the direct ...

In cooperation with Prof. S. Sharma (Department of Chemistry at the University of Delhi, India) and Prof. R. Haag (FU Berlin) we pursue the linear attachment of structure enforcing dendrons to a polymeric backbone, which strongly influence the backfolding of the polymeric chain. The steric situation affect the overall structure in a way that is different from monomeric dendritic amphiphiles. In the project the size of the dendrons, the degree of branching and the additional influence of alkyl ...

In cooperation with Prof. Andreas Hermann (Humboldt Universität zu Berlin) we study the inhibition of influenza A virus fusion with target membranes by multivalent binding of highly functionalised nanoparticles to the fusion mediating virus protein hemagglutinin. Such particles should provide the basis for studies on multivalent amplification of inhibitory effects. For this purpose, gold nanoparticles covered with differently structured ligands are developed in the group of Prof. Rainer Haag ...

Booking our Facilities and Services