We are interested in the analysis of proline-rich sequences (PRS) and proline-rich sequence binding domains (PRDs) in pre-mRNA splicing. The interaction between PRDs and their ligands is characterized by low affinity with correspondingly high off-rates and by moderate specificity, which favors transient binding. Both PRS and PRDs a highly prevalent in the spliceosome, and they likely contribute to spliceosome assembly, allowing for highly dynamic interactions between components. In particular, we are studying two proteins containing PRDs: CD2-binding protein 2 (CD2BP2) and Formin-binding protein 21 (FBP21). For these proteins, we are analyzing the behavior of the PRD and exploring inhibition strategies. In addition, we are aiming at defining the role of these proteins in the splicing cycle in order to better understand the role of proline-rich sequence in the spliceosome.

Profiling and Inhibition of FBP21-tWW

FBP21 contains two WW domains, which are highly similar and arranged in tandem, connected through a short, flexible linker. This allows for the domains to interact in a multivalent fashion with its targets. While the affinity of separate WW domains for its monovalent targets is relatively weak, multivalent interaction leads to a strong increase in overall affinity without the loss of the possibility of highly dynamic regulation. This is a biophysically intriguing feature, but may also be important for the proteins' functional properties. FBP21 interacts via its WW domains with many spliceosomal targets, such as SF3B4 and SmB/B’. To inhibit the interaction, we optimized a peptide ligand for the WW domains. In cooperation with the AG Haag, AG Rademann and AG Seitz, we present the ligand on multivalent scaffolds to achieve high affinity and specificity and ultimately inhibit the interaction of FBP21 with its binding partners in a cellular context. For more information on this project, please refer to the publications in the references [1 – 3]. This project is supported by the collaborative research center SFB765 and pursued by Miriam Bertazzon and Lisa Henning. 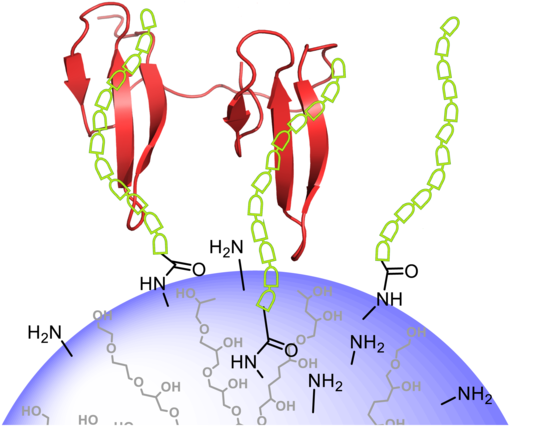 FBP21 in the splicing cycle

FBP21 is, apart for its WW domains, not very well described. It was found to be present exclusively in the pre-spliceosomal B complex, but its function there is unknown. As FBP21 has no apparent catalytic function, it likely fulfills its function through interaction with other spliceosomal components. We are analyzing these interactions biochemically, structurally and functionally. This project is pursued by Lisa Henning.

CD2BP2 is a pre-spliceosomal assembly factor that uses its Glycine-Tyrosine-Phenylalanine (GYF) domain to co-localize with spliceosomal proteins. We are studying CD2BP2 function in vivo and ex vivo to improve our understanding of its functions. To achieve this, we created inducible knock-out mice to study the effects of CD2BP2 depletion. Our results from CD2BP2 knock-out embryos demonstrate a critical role of CD2BP2 for embryogenesis [4]. The knock-out affected cellular growth and differentiation during vascularization of the embryo.

Currently, we investigate the role of CD2BP2 in vitro by interaction analysis and mechanistic studies.Furthermore, ablating the protein in different cells/tissues allows us to study the function of the protein in different settings. We performed microarray analyses in CD2BP2-deficient macrophages. The data revealed highly significant changes to alternative splicing patterns, which we are currently analyzing in more detail.This project is performed by Miriam Bertazzon.