Before infectious agents (such as viruses and bacteria) can invaded their host cell, they often have to pass through biological hydrogels (such as mucus). These hydrogels, which are formed on most epithelial cells, present attachment factors for a variety of infectious agents and can therefore, in principle, act as mobility barriers for infectious agents by generation of attractive interactions. Although this defense mechanism is very plausible, only little is known about the quantitative impact of hydrogel design (i.e., the architecture as well as the presence of attractive and repulsive interactions) on the transport properties of nanoparticles into and within such hydrogels. Within the collaborative research center 1449, we address this question in two projects, one of which aims to quantify the permeability of nanoparticles in dependence of biophysical and biochemical properties (of the nanoparticles and the hydrogel), while the second one aims to develop biophysical assays based on cell cultures that enable to probe the penetration of biological hydrogels by infectious agents (such as viruses and bacteria).

In order to accurately describe the transport of substances into and within a hydrogel, the permeability of the substance (within the hydrogel) has to be determined, which depends on the mobility of the substance within and well as the partitioning of the substance into the hydrogel. In collaboration with the group of Roland Netz (Department of Physics, Freie Universität Berlin), we recently developed an assay based on confocal fluorescence microscopy, in which a hydrogel is formed at a glass interface and confocal fluorescence microscopy is used to quantify the spatial distribution of fluorescently labeled substances (e.g., macromolecules, proteins, viruses, bacteria) as function of time. By solving the underlying transport equations, it is possible to determine the spatial distribution of diffusivity and partition coefficients and hence to extract the spatially resolved permeability of the hydrogel (for the substance investigated). 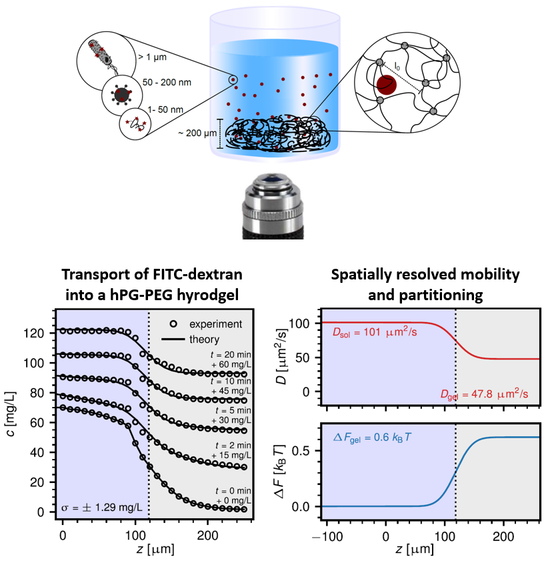 In this project, we aim to apply this assay to quantify the impact of the hydrogel design (e.g., backbone chemical structure, polymer concentration, presence of hydrophobic or charged groups on the hydrogels etc.) on the transport of biological particles (e.g., macromolecules, proteins, viruses, bacteria) into and within the hydrogel. To this end, we will use (synthetic) hydrogels having a well-defined chemical composition and probe their permeability for various biological particles.

In parallel to the confocal-based permeability assay described above, we also aim for characterizing the penetration of hydrogels in biologically relevant environments. For example, in order to avoid alterations to the structure of mucus, which might be induced by extraction procedures, we aim to characterize rheological and transport properties of mucus in in situ measurements (i.e., while being on top of epithelial cells). In collaborations with the groups of Marie Weinhart (University of Hannover and Freie Universität Berlin) and Marcus Fulde (Institute of Veterinary Medicine, Freie Universität Berlin), we form confluent monolayers of mucus-expressing epithelial cells (within petri dish or microfluidic channels) and use fluorescence microscopy to follow the motion of fluorescently labelled bacteria at different sections of the sample (e.g., above the mucus-solution interface, cf. next image).

By continuously shifting this plane across the sample (stacking), we can follow the penetration of mucus by bacteria over time. From such movies, we are able to reconstruct the paths taken by the bacteria in order to overcome the mucus barrier and to infiltrate the cellular layer. Furthermore, we apply mobility analysis on the obtained tracks, which provide us with information on the transient interactions formed between the bacteria and the hydrogel.