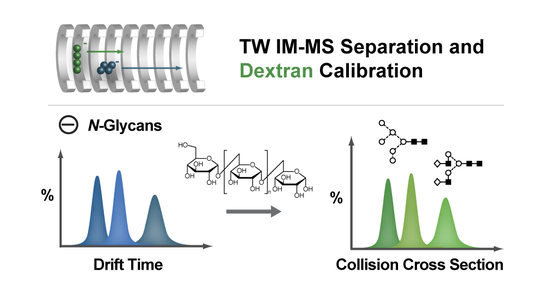 Glycosylation is one of the most common post-translational modifications occurring in proteins. A detailed structural characterization of the involved carbohydrates, however, is still one of the greatest challenges in modern glycoproteomics, since multiple regio- and stereoisomers with an identical monosaccharide composition may exist. Recently, ion mobility-mass spectrometry (IM-MS), a technique in which ions are separated according to their mass, charge, and shape, has evolved as a promising technique for the separation and structural analysis of complex carbohydrates. This growing interest is based on the fact that the measured drift times can be converted into collision cross sections (CCSs), which can be compared, implemented into databases, and used as additional search criteria for structural identification. However, most of the currently used commercial IM-MS instruments utilize a nonuniform traveling wave field to propel the ions through the IM cell. As a result, CCS measurements cannot be performed directly and require calibration. Here, we present a calibration data set consisting of over 500 reference CCSs for negatively charged N-glycans and their fragments. Moreover, we show that dextran, already widely used as a calibrant in high performance liquid chromatography, is also a suitable calibrant for CCS estimations. Our data also indicate that a considerably increased error has to be taken into account when reference CCSs acquired in a different drift gas are used for calibration.