The presynaptic active zone: Bruchpilot-like proteins as major organizers of structure and function

Current focus of our research is the presynaptic compartment organizing release of neurotransmitter filled vesicles. Synaptic vesicles fuse at active zone membranes, characterized by a specific membrane protein composition and electron dense specializations. Active zones are characterized by voltage-gated Ca2+-channels, docked vesicles, and electron-dense structures (T-bars). The molecular organization of presynaptic active zones is the focus of intense investigation. In collaboration with the groups of Erich Buchner and Manfred Heckmann (University of Würzburg) we could identify and characterize the first active zone component (Bruchpilot, BRP) conserved between flies and mammals (Wagh et al., 2006; Kittel et al., 2006).

BRP is a large coiled-coil domain protein with homology to a largely uncharacterized family of mammalian active zone proteins. Mutants were produced in brp showing defective active zone membranes, a complete loss of presynaptic specializations, and severely depressed vesicle release. Particularly, electrophysiology and in vivo imaging showed that Ca2+-channels do no longer cluster appropriately at synapses lacking BRP. We now further address the exact functional and structural role of BRP.

For the identification of BRP we had used Nc82, a monoclonal antibody specifically recognizing the C-terminal end of the BRP protein. Notably, however, the signal of an antibody directed against the N-terminus of BRP is about 150 nanometer distinct from the Nc82 signal (see figure, left image). Thus, BRP might well be an elongated filamentous protein, associating with the active zone in an oriented fashion: The N-terminal head associating with the active zone membrane, the tail converging into the cytoplasm (see figure, right image). We speculate that this arrangement might have evolved to direct synaptic vesicles to their site of fusion. In the moment, biochemical and genetic analysis are used to further work out BRP function. 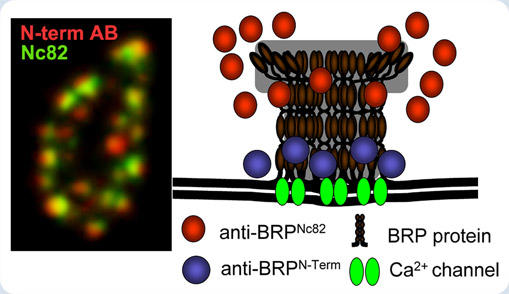 Synapses typically are only about 300 nm in diameter or less. This fact has inhibited studying synaptic substructures with conventional light microscopy (being diffraction limited and thus only allowing optical resolution below 250 nanometer). STED (stimulated emission depletion microsocopy) is a novel advance in fluorescence microscopy with a spatial resolution that is conceptually no longer limited by diffraction, allowing to resolve substructures below 100 nanometers. With STED, Bruchpilot forms a donut-like distribution centered at active zones of NMJ synapses (Kittel et al., 2006). To boost our understanding of active zone function, a full picture of the molecular synaptic architecture on the subsynapse-level is critically needed. Thus, we also study the distribution of other proteins involved in organizing active zone structure or function, as e.g. Liprin. STED analysis uncovered that Liprin forms discrete "quantal" spots surrounding the active zone center labeled by BRP. Combining these novel forms of imaging with genetic and biochemical analysis we seek to further contribute to our understanding of synapse assembly in both the healthy and diseased nervous system.

You may continue reading about STED microscopy and view the summary or background information about our research.