The project includes reactivity studies of ternary phases of novel low-valent metalates, such as lithates, ferrates or bismuthates, using ionic liquids as solvents. Imidazolium salts, such as 1-butyl-3-methylimidazolium chloride (BMIMCl) (Scheme 1), are part of this class of compounds and are applied as ionic liquids in our research.

Scheme 1: 1-Butyl-3-methylimidazolium chloride (BMIMCl) as an example of an ionic liquid.

Ionic liquids enable the dissolution of manifold compounds which are considered poorly soluble or even insoluble in common solvents.[1] The chemical properties of these polar yet non-coordinating solvents, promote the solvation of organic as well as inorganic compounds, expanding the range of potential combinations of synthetic reagents.

Common methods of solid-state reactions require high temperatures and long reaction times, for the most part resulting in the formation of the thermodynamic reaction products. The specific properties of ionic liquids combined with auxiliaries, e.g. the addition of further salts or elements, allow syntheses to be performed under considerably milder conditions, enabling access to the kinetic reaction products.[2]

Alkali- and earth alkali metalates are classes of compounds that can be synthesised accordingly. Tetramethylammonium dichloridolithate(I), obtained from the reaction of lithium chloride and tetramethylammonium chloride (Scheme 2), is an example of such a compound. Figure 1 depicts the crystal structure of the compound in the solid state with the lithium cations tetrahedrally coordinated by the chloride anions. 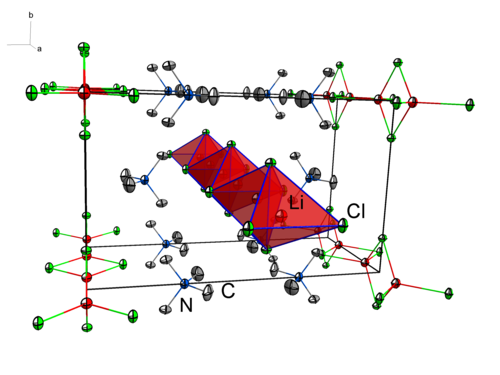 Figure 1: Extract from the crystal structure of NMe4[LiCl2]. Calculated hydrogen atoms are omitted for clarity. Displacement ellipsoids are shown at the 70% probability level

The reactivity of binary and ternary phases, which are insoluble in common solvents, we are further investigating in so-called deep eutectic solvents. The characteristic dissolution ability of these solvents, enables the dissolution of zinc(II)oxide, a binary oxide rendered insoluble.[3,4]

Additional characterisation techniques include vibrational spectroscopy, such as IR- or Raman-spectroscopy.