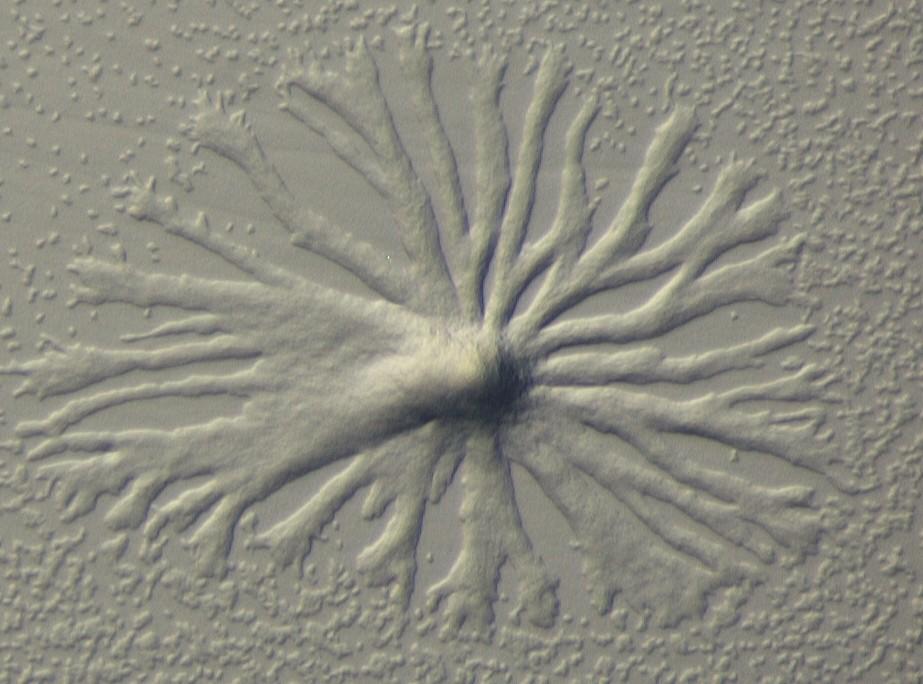 Cellular slime molds are a group of eukaryotic microbes that are ubiquitously found in soils in moderate climates. About 100 species have been described up to date, ranging from the very primitive Guttulinopsis to the complex Polysphondylium and including even a predatory species that can feed on other cellular slime molds.

Typically, cells of a Dictyostelid grow as solitary amoebae on soil microbes; when a critical relationship between cell density and the available food source is attained, they enter multicellular development consisting of (i) chemotactic aggregation into mounds of up to 100,000 cells, (ii) transformation of this aggregate into a polar, slug-like structure surrounded by an extracellular matrix (the "slime sheath"), (iii) an optional migratory phase which is controled by the chemical and physical conditions of the environment and (iv) culmination and terminal differentiation whereby pre-differentiated, future stalk cells at the tip of the slug "gastrulate" through the mass of pre-spore cells, forming a rigid stalk of dead, plant-like cells which supports a ball of resistant spores that under favorable conditions can germinate and start another round of the asexual cycle.

Owing to the simplicity of this developmental process which yet allows to address a number of problems (e.g., phagocytosis; regulation of tissue size; arrest of growth and initiation of differentiation; cell movement and the cytoskeleton; chemotaxis; signal transduction; cell contacts; morphogenetic movements; proportioning; programmed cell death) one species, Dictyostelium discoideum ("the slime mold"), has been chosen as a microbial model in developmental biology. Very little work is done at present on the other species.

The protein phosphatase calcineurin is conserved from yeast to men (except plants). The protein plays pivotal roles in different signal transduction pathways including the immune response and multicellular development.

In our main research organism Dictyostelium discoideum calcineurin is responsible for the correct stalk formation and has an impact on tip dominance during the formation of fruiting bodies (Böckeler et al., 2006, BMC Dev Biol).

Current research in our lab investigates the role of the catalytic subunit of calcineurin as well as the identification of target proteins of this important phosphatase.

Evolution of chemical communication and multicellularity

From the biological point of view there is a remarkable variety of forms and adaptive solutions among the species that have been classified as cellular slime molds by taxonomists. Protostelium is not truely multicellular because a single cell will develop into a single spore sitting on top of a delicate cellulose stalk. Acytostelium is one of the most interesting cases because it has no programmed cell death: morphogenesis yields a fruiting body consisting of a tiny acellular cellulose stalk supporting the spores. The acrasin (the "hormone" that coordinates chemotactic aggregation) of Acytostelium has not been identified. At this point we encounter the first species that sacrify part of the population of the aggregate for stalk cell formation. Dictyostelium minutum and Dictyostelium lacteum form small fruiting bodies with cellular stalks made of non-viable cells. During aggregation their cells do not form streams and there is no pronounced rhythmic stimulation as in the complexer species. The fact that these species communicate via folic acid derivatives whereas the more complex Dictyostelium species and Polysphondylium use cAMP and peptides, respectively, could give a hint to explain how chemo-communicative systems might have evolved from food-seeking behavior of single cells that chemotax towards folic acid released by their bacterial prey. Consider now the "real" Dictyostelium species (discoideum, mucoroides, purpureum, giganteum, ...). They have changed their chemical language, using cAMP instead of pteridines as a hormone. Aggregation is rhythmic, cell populations showing nice oscillations in suspension and ring and spiral patterns on solid substrates. Also, they aggregate in streams. Definitely the cells in their mature stalks are dead. There is already a difference between D. discoideum and D. mucoroides in that D. discoideum slugs are really free-moving whereas D. mucoroides deposits a mature stalk on the substratum during slug migration (so the percentage of stalk and spore cells that one aggregates makes can vary depending on the distance it migrates whilst in D. discoideum there is a fairly constant proportion of 25 - 30% stalk cells). Two additional species are interesting for the morphology of their fruiting bodies: D. rosarium has multiple spore heads attached to its stalk, D. polycephalum fruiting bodies stand together in clusters. Polysphondylium species form complex, branched fruiting bodies, each branch and the tip of the structure supporting a ball of spores. Apparently there are morphologically distinct "founder" cells in starving Polysphondylium populations which initiate aggregation by emitting the chemoattractant first. Polysphondylium cells communicate by glorin, a complex small peptide; they also show oscillations and streaming, can get very large (a Polysphondylium isolate that we found makes fruiting bodies of several cm in height), and up to 90% of the cells in the aggregate will form the stalk. Finally, my favorite species, D. caveatum, is certainly a Polysphondylium species that lost its branches (things like this appear to happen with parasites as well). This predator will enter aggregates of other cellular slime mold species (but can also be grown in suspension cultures of its prey) to feed on the cells in this body. Until its population density becomes critical with respect to that of its food source the prey slug more or less keeps its shape, but then culminants of caveatum break though its slime sheath while they complete morphogenesis. Waddell has made the remarkable observation that D. caveatum can turn into a cannibal by a single mutation, so it appears to live somehow on a razor blade´s cutting edge.

For some time, we had contemplated an evolutionary model where chemical signaling systems originated from food-seeking behavior towards folic acid. Such a chemosensory system could be modified to serve communication purposes and, later, the active substances would change, first to cAMP (an otherwise ubiquitous intracellular messenger), finally to peptides which apparently serve for communication purposes only. In parallel, multicellularity could have evolved, starting from the unicellular Protostelium and culminating in the ever complexer Polysphondylia.

When this model was tested recently by analysing the molecular phylogeny of ribosomal RNA and protein sequences (Schaap et al., 2006, Science) it turned out to be completely wrong (sometimes you are wiser before...). Indeed, the last common ancestor to modern social amoebae had a multicellular life-style, its cells comunicated via a peptide signal that may be derived from an ancient defense mechanism (secretion of an antibiotic peptide), and part of the cells in the organism differentiated to stalk cells. The acellular stalk in Acytostelium species therefore is a derived trait.

The genomes of a number of species respresenting the major branches of Dictyostelid descent are now being sequenced. The results will certainly yield valuable additional insight in the evolution of cell-cell communication and pluricellularity in social amoebae.