The main goal of our research is to understand the role of the hormone cytokinin in regulating plant growth and development and, more recently, responses to stress. Cytokinin is one of the classical plant hormones, it was discovered during the 1950ties as a factor inducing plant cell division. Chemically, cytokinins are purine derivatives and the main active cytokinins are isopentenyladenine and trans-zeatin. The cytokinin signal is perceived and transmitted by a two-component signaling system. Membrane-located histidine kinases sense cytokinin and transmit the information via phosphotransmitter proteins. These activate B-type response regulator proteins, which are transcription factors realizing the transcriptional output of a cytokinin signal. Our past research has made various contributions to characterize the functions of cytokinins, particularly in the model plant Arabidopsis thaliana. Results have shown that a key activity of cytokinin is to regulate the transition from cell division to cell differentiation. In this way, the hormone regulates quantitatively a number of traits, for example root and stem growth and the size and activity of reproductive meristems, which are relevant for breeding of crop plants. We are exploring the transfer of the knowhow from Arabidopsis to crop plants.

A second field of study is photoperiod stress. Photoperiod stress is a novel type of abiotic stress for plants, which is caused by the prolongation of day length. Short-day adapted Arabidopsis plants respond to a prolongation of the light period by several hours with a complex stress response during the following night. Hallmarks of this response is a strong induction of typical stress marker genes, an increase in the concentrations of reactive oxygen species (ROS) and of the stress hormone salicylic acid. Strong photoperiod stress may lead to programmed cell death (PCD) in leaves during the days after the stress. RNA-seq analysis has shown that the response to photoperiod stress resembles the response to pathogen infection. 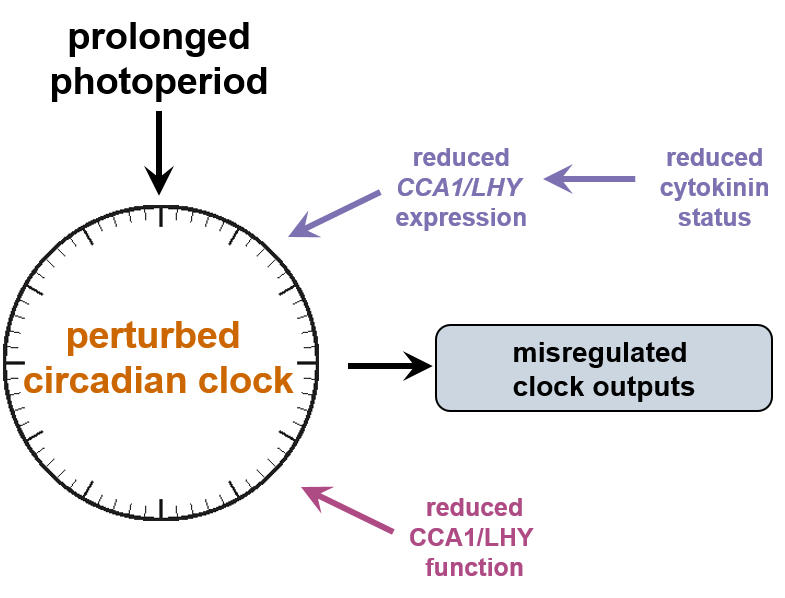 Photoperiod stress is caused by a prolonged photoperiod.