Dissertation: Orthogonal Analytical Approaches for the Investigation of Specific Metabolic Pathways of 17α-Methyltestosterone with the Focus on Hydroxylation Reactions

Anabolic androgenic steroids (AAS) are commonly used as performance-enhancing drugs (PEDs) in sports because of their anabolic effects. Nearly half of the adverse analytical findings (AAF) in 2019 are correlated to AAS misuse [83]. The metabolization process plays an essential role in the analysis of endogenous and exogenous steroids. Therefore, investigations on drug metabolizing and steroidogenic CYP enzymes are important in antidoping research. The most common reaction catalyzed by CYP enzymes in phase-I-metabolism is the introduction of a hydroxy group. Currently, analysis of AAS is mostly performed using GC-MS systems. These methods usually correlate with laborious sample preparation and extended run times compared to LC-MS(/MS) methods. On the other hand, LC-MS(/MS) methods have a lower separation efficiency than GC-MS systems. SFC, as an orthogonal analytical approach, was used to separate the hydroxy metabolites of MT. This project aimed to get a more in-depth look at the metabolization and analysis of MT, an AAS prohibited as PED in sport by the WADA [1], focusing on hydroxylated metabolites and the aromatization process. Therefore, reference material of 2αOHMT, 2βOHMT, and 4OHMT was synthesized and characterized by HRMS and NMR. In vitro studies with HLM, CYP2C19, CYP1A2, CYP1B1, and CYP19A1 and an in vivo study with one healthy male volunteer were conducted to investigate the formation of hydroxylated MT metabolites. Because existing and developed GC-MS(/MS) and LC-MS(/MS) methods could not separate the hydroxylated metabolites of interest, an SFC-MS/MS method was developed, which gave a good separation. SFC showed its orthogonality by means of the elution order 4OHMT>2βOHMT>2αOHMT>6βOHMT, which differed from GC (2βOHTM>6βOHMT>4OHTM>2αOHMT, as per-TMS) and LC (6βOHMT>2βOHMT>2αOHMT>4OHMT). Finally, the formation of 2βOHMT in HLM and CYP2C19 incubation were verified with synthesized reference material, where CYP2C19 may show the predominant way in its formation. Additionally, the presence of 2βOHMT after CYP19A1 incubation shows its influence in the aromatization of MT. Investigation of urine samples after MT administration showed the formation of 2βOHMT, 6βOHMT, and 4OHMT. However, all three metabolites were only detected to a maximum of 22 hours after the administration and in very low concentrations. Thus, hydroxylated metabolites of MT cannot be seen as superior metabolites over the classical MT metabolites 5αTHMT and 5βTHMT [45]. Future work may focus on developing an SFC-HRMS method to investigate the formation of unknown hydroxy metabolites. As only recently described by Savill et al., incubation studies with different cell lines may be a good alternative for in vivo studies with steroids [84]. Further, the synthesis and characterization of possible metabolite structures will be the next step in investigating the hydroxylated metabolome. Boldenone is the AAS with the majority of reported AAF according to the WADA Testing Figures [83]. Therefore, boldenone, or its corresponding 17-methyl analog metandienone, might be an interesting substance for this kind of study. In addition, further experiments on the aromatization of MT with 2βOHMT and 19OHMT as substrate, and the identification of 2β,19-dihydroxymethyltestosterone as intermediate with synthesized reference material are needed. 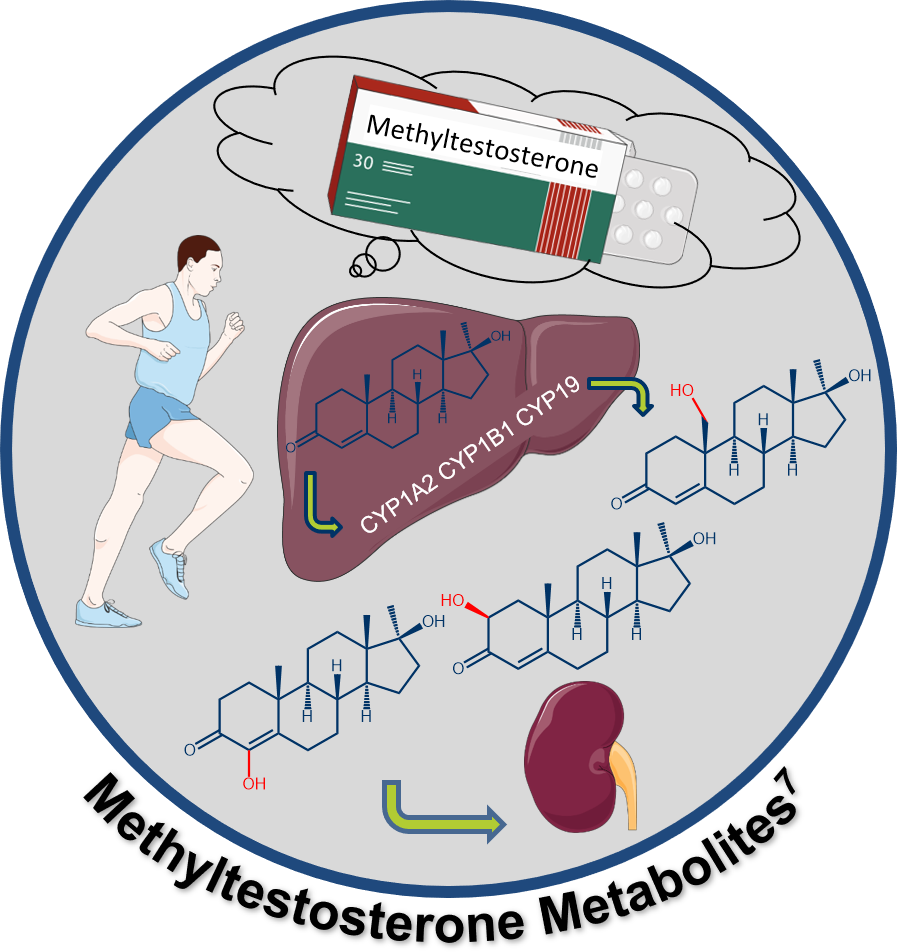 It is assumed that incubation of methyltestestorone and different AAS with CYP1A2 and CYP1B1 results in 2-hydroxy-17‑methyltestosterone and 4-hydroxy-17‑methyltestosterone [oxymesterone]. The aim of my work is to monitor specific metabolic pathways with an newly developed SFC-ESI-QQQ-MS method in addition to the established GC-MS(/MS) and LC-MS(/MS) methods. As the expected metabolites are not available as reference material they must be synthesized prior to the analyses.Some of the metabolic products may also serve as long-term markers of an administration.