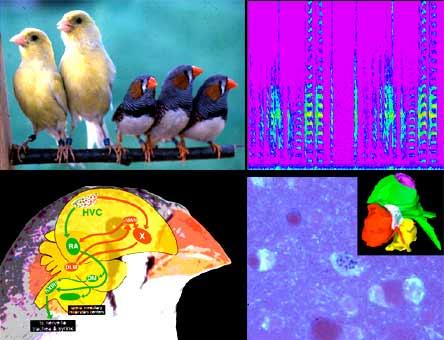 We are aiming to understand how the brain brings about behavior and how in turn behavior influences the brain. To do so, we are focusing on two questions. What are the neural substrates for learned acoustic communication? Most vertebrates communicate acoustically, but in only a few, among them humans, ocean mammals, bats and three orders of songbirds, is this trait learned. For our ethological, neuroanatomical, cell biological and molecular experiments we are using songbirds as our model, because the brain pathways controlling acoustic behavior are best described in birds, and because avian and mammalian brains are sufficiently similar for results to likely be relevant for mammals as well. In addition, bird brains retain the capacity for regeneration of nerve cells in adulthood. This is in contrast to the much more limited capacity of mammalian brains. It is therefore vital for both basic and medical research to understand how neuronal replacement is controlled in birds.