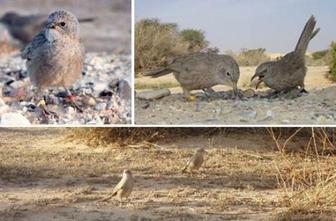 During encounters with potential predators many group-living birds and mammals show a strong vocal response [1]. In addition, a predator encounter often leads to mobbing of the predator by its potential prey. Studies investigating the acoustic structure and function of alarm and mobbing calls have found that most call systems in different species can be broadly categorised into ‘urgency based’ and ‘functionally referential’ call systems. In ‘functionally referential’ call systems different calls refer to different types of predators, in ‘urgency based’ systems the usage and the acoustic parameters of a same call can be varied with the urgency of the threat.

In addition, alarm/mobbing behaviour might also be strongly influenced by social factors [2] and play an important role in intra-specific communication. In this context, signalling of individual quality during an interaction with a predator might increase reproductive fitness.

For my doctoral dissertation I study the predator-related vocalisations and mobbing behaviour and their relation to social factors in a group-living songbird, the Arabian babbler (Turdoides squamiceps). Arabian babblers are cooperatively breeding songbirds that live in year-round territorial and stable groups in the deserts of the Middle East. During predator encounters Arabian babblers utter a variety of distinctive alarm or mobbing calls. The use of these calls varies in relation to the type of the potential predator [3]. However, several of these call types may occur simultaneously, and call use gradually varies with the distance to the same predator [4]. Accordingly, differences in the babblers’ vocal reactions to different types of predators reflect the degree of potential danger rather than the specific type of predator. Further experiments with different predator types and playbacks will reveal more detailed information about the call system and the function of call types and, finally, what information receivers extract from the calls of their conspecifics. Experiments with single birds and social groups examine whether individuality, social rank or social competition between group members influence predator-related behaviours.