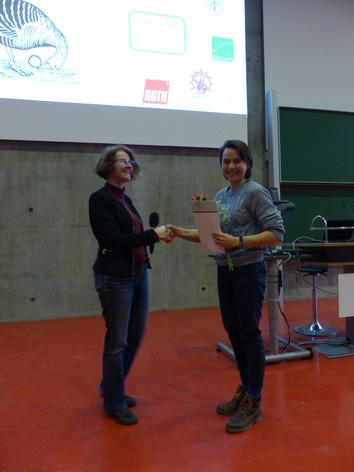 How rhythmic are animal vocalizations?

Music is one of the few behaviors that clearly separates us from our closest relatives. The question of the evolution of music remains unanswered. As opposed to the cultural phenomenon 'music', the basis for the construct ‘music’ can be described as 'musicality'. Honing et al. (2015) define musicality as 'a natural, spontaneously developing trait based on and constrained by biology and cognition'. Their idea is to study music by examining the musicality of different animal species. Musical could for example be an animal's response to pitch ratios or the temporal structure of conspecific vocalizations (for a review, see Hoeschele et al. 2015).

My thesis aims to investigate the temporal structure of animal vocalization on different levels, namely on the individual level, vocalization type level, and group level. I will analyze vocalizations of animals from different taxa, all sharing the ability to produce vocalizations while moving. I hope to get insights into the relationship between functional rhythms such as a wingbeat and the temporal structure of vocalizations. Species of interest are bats as well as baleen whales (since both taxa sing during locomotion) and toothed whales (since both taxa echolocate and vocalize during locomotion). Also of interest are birds, in particular species with extensive flight song such as skylarks.

With my dissertation project, I hope to broaden the knowledge on temporal structures in animal vocalizations. Specifically, I want to find out whether reoccurring temporal patterns can be found in individuals or groups, how close to a ‘perfect rhythm’ those are and which biological constraints might have shaped them.

Honing H, ten Cate C, Peretz I, Trehub SE (2015) Without it no music: cognition, biology and evolution of musicality. Philosophical Transactions of the Royal Society B: 370,1664.