The Molecular Design Lab has a focus on in-silico prediction of biological effects of small organic molecules for drug design.

Drug repurposing and activity profiling. Drug action is rarely explained by an interaction with one single biological target, but by hitting several targets and pathways. Instead of virtually screening a large amount of molecules against one single potential target, we screen with one single (or a few) molecules against a large set of models to better understand the activity profile of already existing drugs or newly discovered drug candidates. 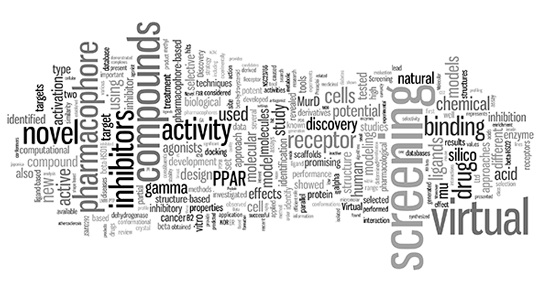 [Wordle, created from all publicated abstracts until 2014

The three-dimensional interaction predicitions of organic compounds with biological macromolecules facilitate a targeted development of drug candidates. This ensures a praxis and industry relevant research.

If a PhD position is of interest (requirements are affinities to computer-based work and medicinal/pharmaceutical chemistry) or a project as part of the pratical year please adress oneself per email to gerhard.wolber@fu-berlin.de