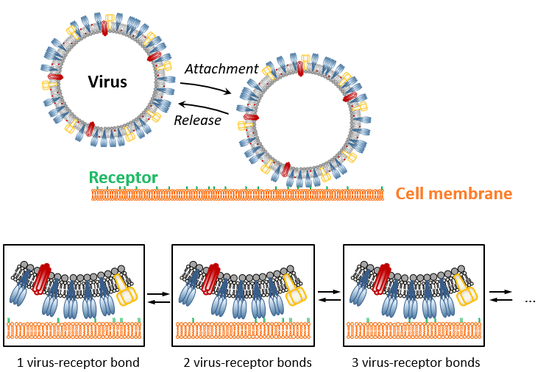 Multivalent interactions, i.e., multiple, non-covalent bonds acting in parallel, are typical for a multitude of biological processes, such as the attachment of viruses to the membrane of host cells. To elucidate multivalency-related processes in detail, it is inevitable to quantify the valency (i.e., the number of single interactions engaged in parallel) on the level of a single interaction complex (i.e., with single virus resolution). This is still a major challenge as the individual interaction is typically weak and therefore maintained only transiently, causing temporal fluctuations of the valency value and generating relatively broad valency distributions across the probed ensemble.
Quantification of multivalent interactions therefore requires methods that on the one hand allows for the characterization of many interaction complexes in parallel (while keeping, for example, the single-virus resolution) but also provide, on the other hand, sufficient temporal resolution to follow temporal fluctuations of the valency. To this end, we apply advanced microsopic techniques (e.g., total internal reflection fluorescence microscopy, confocal microscopy, fluorescence correlation spectroscopy, atomic force microscopy-based force spectroscopy) to quantify the action of multivalent interactions in complementary settings. 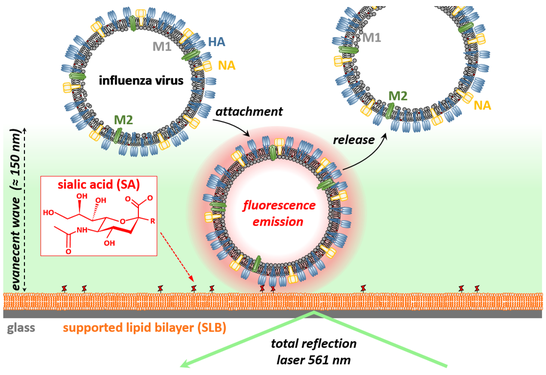 In this assay, the transient attachment and release of viruses is measured using TIRF microscopy. To this end, a supported lipid bilayer (SLB), which is supplemented with attachment factors of the virus of interest, is formed at an interfaces. The transient interaction of viruses with this artificial cell membrane is monitored using total internal reflection fluorescence (TRIF) microscopy, which excites only fluorescently labeled viruses being within 100 - 150 nm to the interface. In this way, viruses are only visualized by the microscope when bound to the artificial cell membrane. The following video shows a representative example, in which the transient interaction of influenza A viruses (strain X31; bright dots in the video) with a sialic acid-presenting, POPC-based SLB was probed.

In such experiments, the artificial cell membrane is in a fluid phase and hence, the viruses are able to move laterally even when bound to the membrane. Interestingly, the mobility of SLB-linked particles (diameter < 400 nm) mainly depends of the number of engaged lipids and enables to estimate the valency of a particular virus by quantifying its mobility (e.g., its diffusion coefficient). Application of single particle tracking to such movies therefore enables to obtain 3 key properties of multivalent interactions: i) the rate of virus attachment to the membrane, ii) a measure of the valency distribution of the viruses, and iii) the valency-dependent off-rate distribution. We applied this assay to determine these binding properties for various viruses, including influenza A virus strains and the polyoma viruses SV40, and to assess how antivirals modify virus-receptor interactions (by probing changes in these key properties induced by addition of the drug).

In recent works, we applied this methodology to quantify the interactions arising between proteins and biopolymers, such as polysaccharides and glycosaminoglycans, and investigated the impact of polymeric charge density on the protein-polymer interaction. Currently, we apply various AFM-based measurement schemes, including quantitative imaging in liquid environments and force spectroscopy, to study the properties of viral binding proteins. For non-enveloped viruses, the viral binding proteins are typically water-soluble and can be directly immobilized at either AFM tip of surface. In contrast, most viral binding proteins of enveloped viruses are membrane proteins and hence poorly soluble in water. In order to characterize the full-length protein (and not only its receptor-binding domain) and to mimic the lipid environment of the viral envelope, we develop protocols that enable to reconstitute binding protein of enveloped viruses into liposomes. These proteoliposomes can be used to generate lipid bilayers that present the viral protein of interest to receptor-presenting AFM tips and hence to conduct AFM-based force spectroscopy of virus-receptor interactions.