Biophysical investigations are often complicated by the fact that most systems of interest exhibit a significant compositional complexity. Often, the impact of the composition on biophysical quantities is not known and subject to current research. An essential aspect of our work is therefore the preparation and characterization of model systems of defined compositional complexity, which are then used in our biophysical assays in order to accurately quantify functional aspects of macromolecules, such as the activity of single enzymes and channels or the interaction dynamics of (viral) proteins that bind to or release from biomimetic models of cell membranes. Typically, we generate such model systems by incorporation of macromolecules of interest into liposomes, yielding proteoliposome (generated by protein reconstitution procedures) or native-membrane containing liposomes (generated by incorporation of membrane preparations into liposomes).

These investigations are conducted using proteoliposomes, which are generated by reconstitution of proteins of interest into liposomes. In order to probe the activity of the proteins, the proteoliposomes are loaded with a reporter dye, the fluorescence properties of which depend on the concentration of a relevant ion species. For example, for proteins that actively or passively translocate protons (pumps and channels, respectively), we encapsulate pH-sensitive dyes such as pyranine for proteins, which allow to quantify the luminal pH value of the proteoliposomes and hence the dynamics of protein activity by following changes in the luminal pH value over time.

As thousands of liposomes can be probed in parallel, hundreds of proton uptake traces can be extracted from a single experimental run, which enables to quantify proton turnover rates with high statistical power and to resolve heterogeneities in the function across the ensemble. 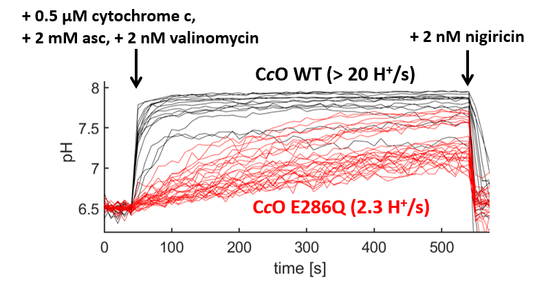 In the past, we successfully applied this methodology to probe proton translocation by proton pumps and pH-activated proton channels as well as the permeability of porins for certain compounds. For these measurements, we used liposomes of various compositions, ranging between well-defined mixtures of synthetic or purified lipids to lipid mixtures that have been extracted from native sources (such as bacteria or plants). In order to determine the distribution of the proteins across the ensemble we reconstitute dye-labeled protein into liposomes, which do not carry a reporter dye. Owing to the single-molecule resolution of our microscopes, such samples can be subjected to stepwise bleaching experiments (see the following figure) that enable to determine the number distribution of proteins across the liposomes. 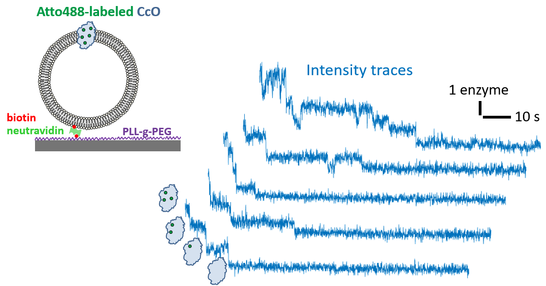 A major challenge in the quantification of virus-membrane interactions is the fact that viruses as well as cell membranes typically show a notable compositional complexity. In order to probe the impact of compositional complexity on the dynamics of virus binding, we develop biomimetic model systems of cell membranes, which are formed either using (i) proteoliposome or (ii) native-membrane containing liposomes. In the first approach, protein-based attachment factors (such as the transmembrane protein ACE2 in studies of coronavirus binding) are reconstituted into liposomes of known composition, providing full control of the final bilayer composition. In the second approach, vesicles are generated by mechanical disruption of cells. SLBs can typically not be formed using these vesicles alone but after supplementing them with synthetic liposomes, which tend to promote SLB formation. In this way, it is possible to generate SLBs that are enriched with native material (originating from cell membranes), but at the expense that the composition is much less well-defined as in the case of proteoliposomes. Hence, in parallel to developing such preparation approaches, our current work also includes the application of biochemical and biophysical approaches such as cryo-electron microscopy, atomic force microscopy, and immunofluorescence microscopy in order to characterize the generated SLBs with respect to surface concentration and distribution of relevant macromolecules. 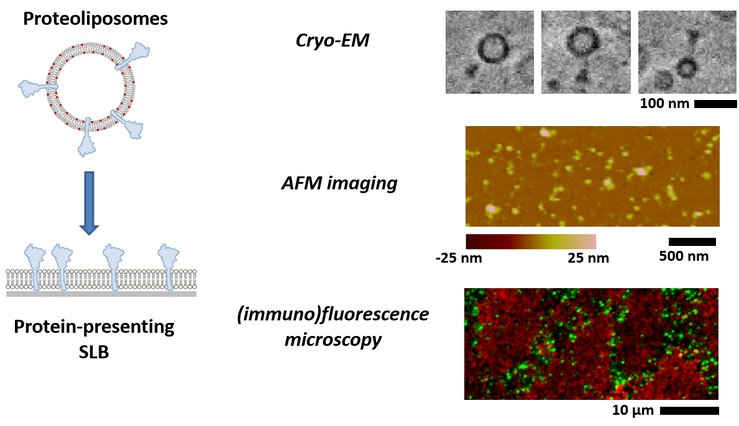