The term ‘priming of defence against herbivory’ refers to a mechanism by which plants employ their defence against herbivores quicker and / or stronger, if they previously experienced herbivore damage or another signal that may indicate a high risk of herbivory attack. For example, if an herbivore deposits eggs on its host plant, future feeding by the emerging larvae is very likely. Recent studies with several plant species showed that plants are able to recognise and respond to herbivore egg deposition. Therefore, plants likely use an herbivore's egg deposition as a reliable signal for the following herbivore attack. However, because larvae are not always hatching from the eggs (e.g. if these are killed by predators or abiotic conditions), it may save costs for the plant to just prime anti-herbivore defences and not to induce them, when eggs are perceived.

Within this theoretical framework, we investigate priming of anti-herbivore defences in solanaceous plants from the ecological level to the transcriptomic, phytohormonal and metabolomic levels. We mainly focus on two model plants the wild tobacco Nicotiana attenuata and the bittersweet nightshade, Solanum dulcamara and investigate them in their interactions with lepidopteran herbivores that strongly differ in their host plant specialisation. We investigate how both of these plants are affected by the oviposition by the beet armyworm (Spodoptera exigua), a generalist with a wide host plant range and compare these findings to the effects of ovipositions by highly specialized herbivores, i.e. the tobacco hornworm Manduca sexta and the bittersweet smudge Acrolepia autimnitella.

Ongoing research questions are for example:

In N. attenuata, we already identified feeding-induced defence traits that are primed by preceding oviposition in non-oviposited systemic leaves and revealed that these traits mediate an increased resistance of egg-deposited plants. Our research project is embedded in the collaborative research centre (CRC) 973 “Priming and memory of Organismic responses to Stress” (B02 “Plant priming of anti-herbivore defences by insect oviposition”).

The bittersweet nightshade Solanum dulcamara is a wild wine relative of tomato and potato that is widely distributed in the Northern hemisphere and native to Europe. It occurs in a wide range of natural habitats. Therefore it evolved under a wide range of abiotic conditions and in diverse ecological interaction interactions, quite opposite to our culture plants that were mainly selected for high yield in agro-ecosystems that are usually optimized for plant production. In order to learn more about the adaptive strategies that plants evolved to cope with herbivory under diverse conditions we choose the bittersweet nightshade as a model system to study plant-insect interactions. We closely cooperate with other researchers in the Netherlands and in Germany to establish the required methods. 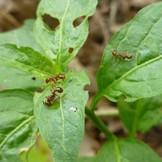 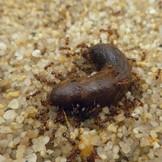 We investigate S. dulcamara’s responses to different herbivores and multiple abiotic stresses at different physiological (e.g. transcriptional, phytohormonal and metabolic) and ecological levels. We recently discovered a new defence strategy of S. dulcamara. The nightshade secretes extrafloral nectar directly from herbivore-inflicted wounds. This wound nectar attracts ants that defend the plant from attacking flea beetles and from voracious slugs. What is novel about this finding is that this wound nectar is secreted anywhere the plant is wounded and its secretion does not involve specialized secretory tissues (nectaries) that are normally associated with nectar release. In the future, we aim to investigate the molecular mechanisms involved in the secretion of this wound nectar as it might help to shed light on the evolutionary history of nectar secretion in general.

Plant secondary metabolites frequently have defensive functions and impair the fitness of herbivores. However, for only a few of these metabolites we know the exact targets in the insect’s physiology. Effects of herbivore-induced plant metabolites on the insect immune system are hardly ever investigated. Plants host a vast number of entomopathogens on their surface, which can be harmful or fatal for herbivorous insects. Once the pathogens are ingested by the insect they have to overcome the insect’s immune defence in order to be infective. Should ingested plant metabolites weaken the insect’s immune system and make it more susceptible to infection, these metabolites could function as an indirect defence mechanism. We investigate the impact of plant secondary metabolites of wild tobacco Nicotiana attenuata, on the immune system of the tobacco hornworm Manduca sexta. We assess the immune parameters and performance of healthy and pathogen-infected M. sexta larvae on transformed tobacco plants which are impaired in the production of specific defensive metabolites. To determine the  insect’s immune status in these experiments, we quantify the transcription of immunologically relevant genes, the activity of enzymes involved in key steps of the insect’s immune response.