Integrated X-ray crystallography, optical and computational methods in studies of structure and luminescence of new synthesized complexes of lanthanides with ligands derived from 2,6-diformylpyridine 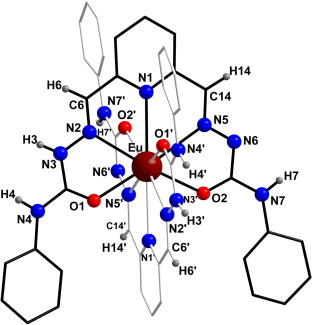 The reaction of 2,6-diformylpyridine-bis(benzoylhydrazone) [dfpbbh] and 2,6-diformylpyridine-bis(4-phenylsemicarbazone) [dfpbpsc] with lanthanides salts yielded the new chelates complexes [Eu(dfpbpsc–H+)2]NO3 (1), [Dy(fbhmp)2][Dy(dfpbbh–2H+)2]·2EtOH·2H2O (fbhmp = 2-formylbenzoylhydrazone-6-methoxide-pyridine; Ph = phenyl; Py = pyridine; Et = ethyl) and [Er2(dfpbbh–2H+)2(μ-NO3)(H2O)2(OH)]·H2O.
X-ray diffraction analysis was employed for the structural characterization of the three chelate complexes. In the case of complex 1, optical, synthetic and computational methods were also exploited for ground state structure determinations and triplet energy level of the ligand and HOMO–LUMO calculations, as well as for a detailed study of its luminescence properties.

Asymmetric, potentially pentadentate ligands (H2L3) are formed by subsequent condensation of a semicarbazide and benzoylhydrazine on 2,6-diacetylpyridine. Two equivalents of H2L3 reacts with CeCl3·7H2O, Ce(SO4)2·4H2O, or EuCl3·6H2O under formation of [LnIII(HL3)2]+ cations (Ln = Ce, Eu) with exclusive deprotonation of the benzoylhydrazone ligand arms. The Ce4+ ion of the sulfate salt is reduced during the reaction and forms 10-coordinate singly charged complex cations, the structure of which is identical to the product of the reaction of cerium(III) chloride. The exact position of deprotonation in the ligands is resolved by infrared spectroscopy, bond lengths considerations, and the hydrogen bonding in the solid-state structures of the products. A similar approach allows the synthesis of mixed semicarbazone/thiosemicarbazone ligands (H2L4). The reaction of H2L4 with Sm(NO3)3·6H2O leads to the first structurally characterized lanthanide complex with thiosemicarbazone coordination. The solid-state structure of the 10-coordinate complex [Sm(HL4)2]NO3·H2O shows exclusive deprotonation of the thiosemicarbazone arms of the ligands. All isolated complexes are air stable and do not undergo ligand exchange reactions or hydrolysis in the presence of water